Does Irish Music now days, have an Identity anymore.?

This thought had always meandered into a sort of patriotism for me, mostly turning into a conversational battle between myself and friends, when we talked about music.

In a country that now has many different cultures,religions and creeds.

I feel that need, to fight for my heritage and culture as I see big intercultural change happen everyday, especially in the Irish music industry. No matter where we are in the world, as a people, whether we are Irish,English, French, German etc, I believe we represent our people and where we come from and our music is no exception and how it sounds, is one I feel is not to be watered down.


Being a Musician myself for many years. I have always felt, I had an important role to play, a role to represent my country through my music and I needed to do it right. Irish music as a whole has changed over the years, in particular the main stream music. Gone are the days of the balladeer Genre of the Dubliners, Luke kelly and Christy Moore. Our music has changed, you hear an Irish band on the radio now and they don't sound Irish at all, but American or English. Is that the industries fault..?


Do they not believe that genera sells.? Who knows.

But I do know, from working with children that If the Irish youth of today heard a New Irish ballad song, they would think..... " Ah that's music that our Grandfathers listen to." which is wrong.

Its our heritage, that's all, that has been passed down, just like the old folkloire's of past times. Stories that are in fact timeless.

I believe, but its just my non bio est view That a true Irish Songwriter should keep in mind of what they are representing , whether it be Country,Blues Punk or Rock . They should at least sound Irish.

"So, Does Irish Music sound Irish anymore or has it lost its identity to its Genre.?"

To answer this, I need to first go back to explain what I mean by identity and an Irish one at that.

Take for instance a rock band from the 70's led by a charismatic poetic genius, An Irish decent born in England but grew up in Dublin, who had always until the day he was prematurely taken from this world, loved his Irish heritage and it had always came through with passion in his music.

That band being Thin Lizzy and the man, the one and only Phil Lynott.


Though their Genre would have been classed as a love child of rock, if you closed your eyes and listened to one of their records It sounded and felt Irish,from its back bone right through to it's ear tantalizing melodies.

The song "whiskey in the jar" for instance, though the song started its life as an Irish folk ballad and had been recorded by Irish Ballad group "The Dubliners" back in the 60's, with a completely new arrangement on their cover of the song, Phil lynott and Thin Lizzy, took it to new heights and made it into a Rock song that kept it's Irish blood flowing within its core. Therefor keeping its Irish identity and not getting lost in the Genre of rock and in an ever changing world with culture clashes, that is an art form in itself, that needs to learn to survive.


"Sarah" a beautiful soft rock song, Lynott penned for his daughter once again, though it had Rock elements attached to it, very much felt and sounded Irish. Bob Marley, you would know he was Jamaican from his music right.? Heritage attached.


The sound of today on the other hand, I feel has lost it's way, through our Irish bands making so called "Irish Music" and there, my reasons for my skepticism lye's. Should it really be classed as Irish Music just because the artists are Irish. ?

If you stick a beans label on a tin of peas, does that class them as being beans..? On the outside maybe, But it is the contents within, that really makes up its chemistry and establishes what it really is, and I feel music is the same.

Respectively the band I am about to mention next, don't get me wrong, I think they are really good at what they do and I would hold them in high regard musically, but I personally feel with them being Irish,they had lost their integrity for making music that sounded Irish, they don't sound Irish at all.


The Script, these three guys all hail from Dublin/Ireland, and though they were signed to British label Phonogenic Records , if you once more closed your eyes and listened to their music you would think they were American, not even British, never mind Irish, but American and you may blame their Pop Rock/Rnb sound for that, but surely they could have made it sound a little more Irish.?


" For the first time" it has a sort of rap in it, with an RnB feel and you may ask.

"How can you make that sound Irish..?


Straight off the bat, Damien Dempsey's "Dublin town" springs to my mind, He raps in that,

it may not be in the same caliber as "For the first time" but hay close your eyes It sounds Irish.?


It saddens me to think the script had lost their heritage as Irish Musicians within their sound and had been lost within their genre loosing with it, their Irish heritage and sadly they are not the only ones within the Irish music scene to do so, but that is a story for another day.


So from one Irish musician to another in my plead to all the Irish musicians who are either making Music or thinking of, try to keep to your heritage and don't get lost within your Genre, you are Irish after all with a heritage to help survive within a multi cultural world, an Irish one.

We are but a small fish within a big ocean so there for, keep making great Music, "Irish Music".

Taken from a Blog @  BerthmarkmusicBLOG 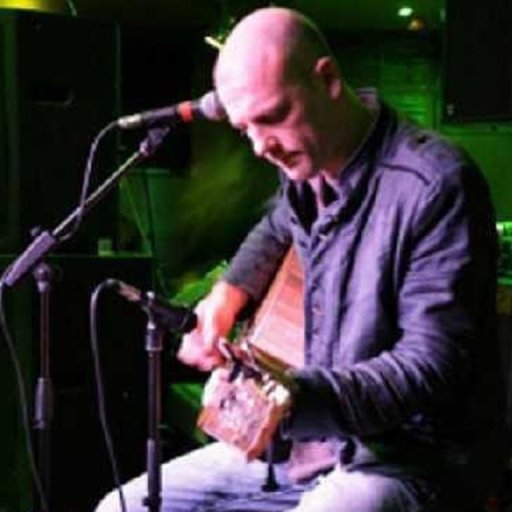 Well the mad man trying to get out of me and writing this music is. I am from Dublin in Ireland and As a Musical Artist, multi instrumentalist, I tell life stories through Acoustic Folk/Rock and Blues .

In my school days, I learned the thin whistle and Bodhran and writing short stories was a huge passion of mine. I wrote all the time and when I stopped, I wrote some more.

Over the years that followed, while I started teaching myself other instruments, I started putting my stories to songs. The guitar became my first love for turning them into songs, giving them life. I felt a knack for it. A perfect fit for me and I have been writing this way ever since. I have played on the live circuit for many years, way before this social media thing. Playing live gigs up close and personal, supported many bands and auditioned as a solo artist, getting through the many stages involved with Tv shows like , Ireland's Your a star and the Voice. Only to hit a brick wall involved with reality Tv, and its Politics.

I have had my work Chart in Itunes, Deezer and IHeartRadio and to date I work with teens producing music through workshops I created, through a youth club in association with a youth organisation called Foroige. Recently I have moved into scoring for film, and with that New project in the making, hopefully exciting times ahead.

“ Music and writing is in my bloodstream and it has always been my lifeline ”, For more about me and some FREE Downloads. Why not Visit www.berthmarkmusic.com Thank you for dropping by.